Cormac Thompson moves back up to No.1 with 'Empty Chairs At Empty Tables'.

This is not the first time someone has reached the top of The FAB Chart twice with the same song. Sawyer Fredericks did it with ‘Not My Girl’. The difference is that Sawyer’s were separate recordings of the same song, with a couple of years between them. With Cormac, it’s the same release from the same recording which is now into its 18th week on the chart.

Cormac’s journey into the land of FAB began modestly enough. He was a happy member of his school’s choir who decided to post a video on Youtube of him singing for his grandmother during the Covid lockdowns. That lead to him being noticed and signed by Decca Records. His album included his sublime rendition of ‘O Holy Night’ which pounced straight into the FAB Chart No.1 spot at Christmas 2020.

In March, this year, Cormac won the public vote for Best Male Artist in the FAB Chart Music Awards. He is a well deserved Prince of FAB with a place on the FAB Chart Wall of Fame 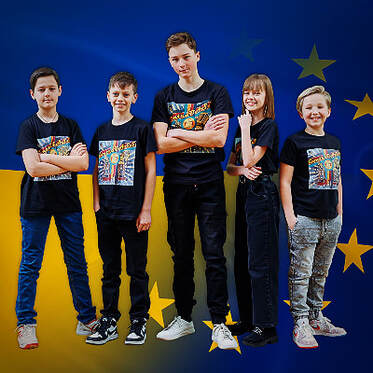 Contra BASS  move up to No.2 with 'Trooper'.

These young Rockers from Ukraine have impressed older and much more experienced artists.
No surprised they have reached No.1 on The FAB Chart three times and are knocking on the top door again.
They are Polina Kosenko on drums, Hlib Kosenko on lead guitar, Andriy Desyatnyu on bass, Andriy Labenko on lead vocals and Dmitro Kachur on second guitar.

They recently toured parts of Europe outside of Ukraine and have raised funds to help their country’s efforts to defend against the unjust and very violent invasion by Russia.
They started out as a school band, but it soon became obvious that they were capable of being recognised as much greater than that. Music is not about age, its about the ability to entertain and capture emotions.

Ready Set Bro  shoot up to No.5 with 'Stardust'.

Brothers Tavyn, Auslen and Kaplan, have been brought up within the music scene. Their dad is a  professional musician who has charted in Canada and was nominated for the Canadian Country Music Awards with country rock band Jo Hikk.
Their influences include KISS, Pink Floyd Def Leppard and Queen.

Tavyn, aged 18, is a drummer at heart but found his true calling playing bass;
Auslen, aged 16, has impressed audiences with his guitar skills since he was 8 years old, winning gold at the 2016 Calgary Performing Arts Festival.
Kaplan, aged 13, easily gravitated to the role of lead singer with a strong affinity for guitar and keyboards.

‘Stardust’ has taken it’s time to climb the FAB Chart, but perfection cannot be rushed.

Reid Jamieson  moves up to No.12 with 'Pappy's Lullaby.'

Reid is singer / songwriter from Vancouver, Canada.
He always loved to sing, even as a young child he would use whatever was handy, even a vacuum cleaner, as a prop when practicing his moves. He lost his mother when he was 15 and finds comfort in music.
Even today, he is at his happiest when recording and mixing in his home studio.
His influences include John Lennon, Billy Joel, Lionel Ritchie and Neil Young.

You can catch Reid performing live at the Harmony Arts Festival in West Vancouver on 1st of August.

This is his first time on The FAB Chart, but he has been in music for quite a while. This song ‘Pappy's Lullaby’ is one his father wrote for him when he was only a small child.

Julie Lamb Outfit  come in at No.20 with 'Clock Strikes'.

They are an 8 piece funk-pop collaborative from New Zealand.
Along side Julie Lamb on vocals are Giacomo Caleffi on Drums, Chris Fursdon on Bass, Shan Jordan on Keyboards, Matt Fitzpatrick on Guitar, Kali Barton on Trombone, Frank Talbot on Saxophone, plus other vocalists Miranda Turner and Melanie Grice.

Giacomo wrote this song. He says "The inspiration came to me while studying a song by the awesome band Mammal Hands which featured a polyrhythmic pattern played on piano. I feel this song as a series of ocean waves following one another and I love the fact that it made Julie think of clock strikes because I guess in a way waves and time are doing the same, always travelling in the same direction and taking our lives on a constant journey up and down.”

Visit Julia Lamb Outfit on Facebook - www.facebook.com/julielamboutfit
Go back to the top to access the home page, for this week's FAB TOP 30